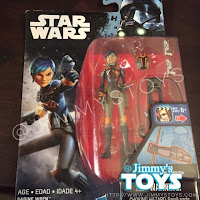 I'm glad that his figure has a removeable helmet, unlike the previous two pack figure.  This figure is a nice addition to the Star Wars Rebels 3.75" series of figures.

There will be a couple of more Star Wars Rebels figures available soon, Prince Leia and the Darth Maul/Seventh Sister two pack.  I also need to find one of the A-Wings with Hera.